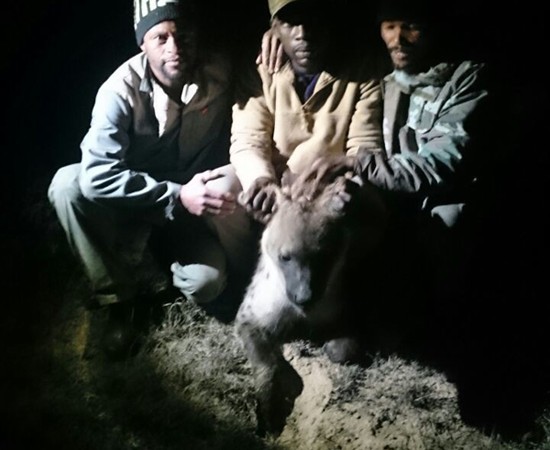 We would like to thank all of our generous sponsors who have contributed to the building of an enclosure for Shenzi, Benzi and Ed the hyenas.

Unfortunately, we have to share some terrible news in their story.

About three weeks ago one of the hyenas managed to escape from its enclosure and went wandering onto the adjacent farm. Although the hyenas were not yet in our name or our responsibility we decided that something needed to be done.

Richard Daniell, Director of the Daniell Cheetah Project (DCP), went out with a trained game capture team* and vet** to dart the hyena. It was successfully darted and moved back into its enclosure. 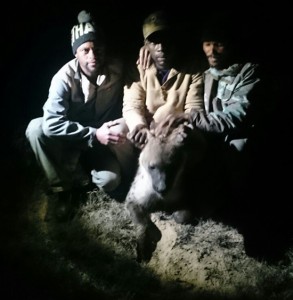 This was after the first escape, they hyena was successfully darted and returned to the enclosure.

Unfortunately the enclosure was not up to standard and, less than a week later, the hyena escaped again. What followed was a night after night vigil and daily search for this hyena, where in the meantime we got reports of the hyena catching livestock and creating havoc. We also got threats from the livestock owner that they WILL kill the animal on sight.

Richard begged them to give him some time in order for us to recapture the animal – this led to several trips for Richard and the vet, as well as a chopper being hired to help in the search.

The people from the farm eventually managed to track the hyena back to the enclosure, where they decided enough is enough. They saw a hyena and fired a shot. A couple of seconds later they saw a hyena running out of a nearby bush and fired another shot. It then turned out that they had brutally murdered the two innocent hyenas in their enclosure. The culprit was still on the loose.

Again, Richard begged them not to take any drastic measures and to give him one more week. Day and night, on the whole of the weekend 28th – 29th May, the vet searched for the hyena. It was closer; they could hear it calling but unfortunately could not successfully dart the animal.

Plans were immediately made to get an expert out on Wednesday 1st June to “call” the hyena to be able to get it recaptured. But the morning before this, we got the sad news that the remaining hyena had also been shot and killed.

The hyenas were illegally shot. Permits are needed to hunt hyena as they are a protected TOPS specie.

Where do we go from here?

We, at the DCP, tried everything we could to save these poor hyenas and are devastated by their loss.

We do not want to leave it at that. We want to continue with our plans and continue with the Spotted Hyena Project in memory of Shenzi, Benzi and Ed as an awareness program, and as ambassadors for this heartbreaking tale.

Again, thank you to our sponsors. We hope you will continue to support this project and make sure these hyenas did not die in vain. Our gratitude also goes to the Kalahari Game Capture Team and Dr Elmien Kotze for their devotion and relentless searching.